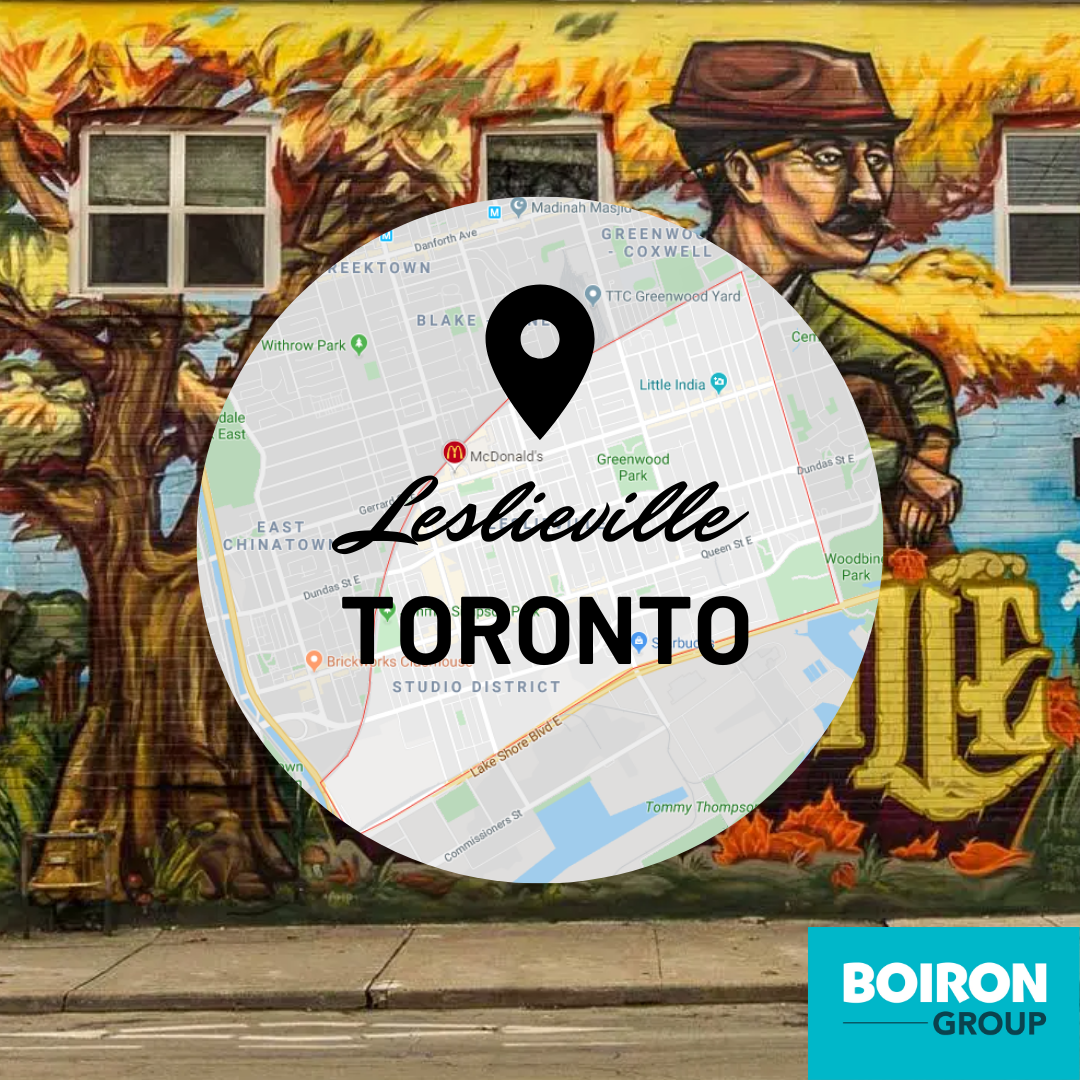 Referred to by the NY Times as the next Williamsburg, this hip urban neighbourhood is home to young, upper-middle-income singles and families. Initially home to various factories, the neighbourhood underwent rapid gentrification in the last 20 years and is now famously known as a brunch hot-spot.

From brickyards and nurseries

Leslieville began as a small village in the mid 19th century when George Leslie (after whom the community is named) moved to the area and opened the Toronto Nurseries, which became the largest horticulture business in the country. Most of Leslieville's residents were gardeners or employed at one of the brick-making factories in the area. Leslie's home at Queen and Leslie no longer exists but the general store that the family owned near Queen and Jones still remains. 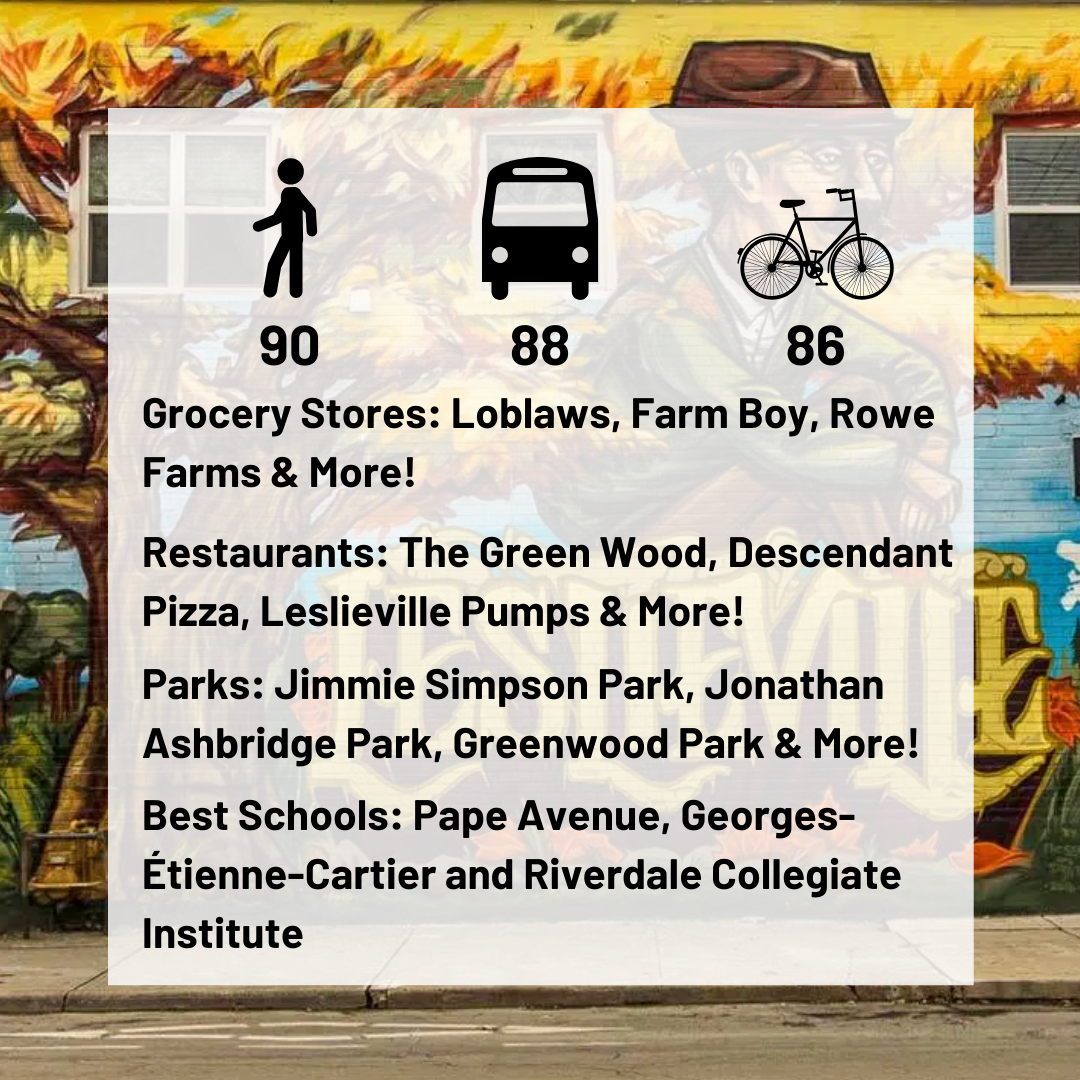 With its quaint tree-lined streets, Leslieville is home to several lush parks and only steps away from Lake Ontario. Sports and outdoor enthusiasts will enjoy Greenwood Park with three baseball diamonds, an artificial ice rink, a pool, and a playground.

The Jonathan Ashbridge Park on the south side of Queen Street features two tennis courts, a children's playground, and a wading pool. Located here is also the historical Ashbridge Estate. The property was settled by the Ashbridge family, English Quakers who left Pennsylvania after the American Revolutionary War. The present home was built in 1854 and the only family in the only in the history of Toronto to have continuously occupied land that they settled for more than 200 years.

Home to countless indie shops, Queen Street East makes Leslieville a walker’s paradise. Downtown Toronto is a short 13 minutes away by car, 27 minutes by TTC and only 20 minutes by bike. With entrances to both the Gardiner Expressway and the Don Valley Parkway close by, getting to anywhere in the city is a breeze! 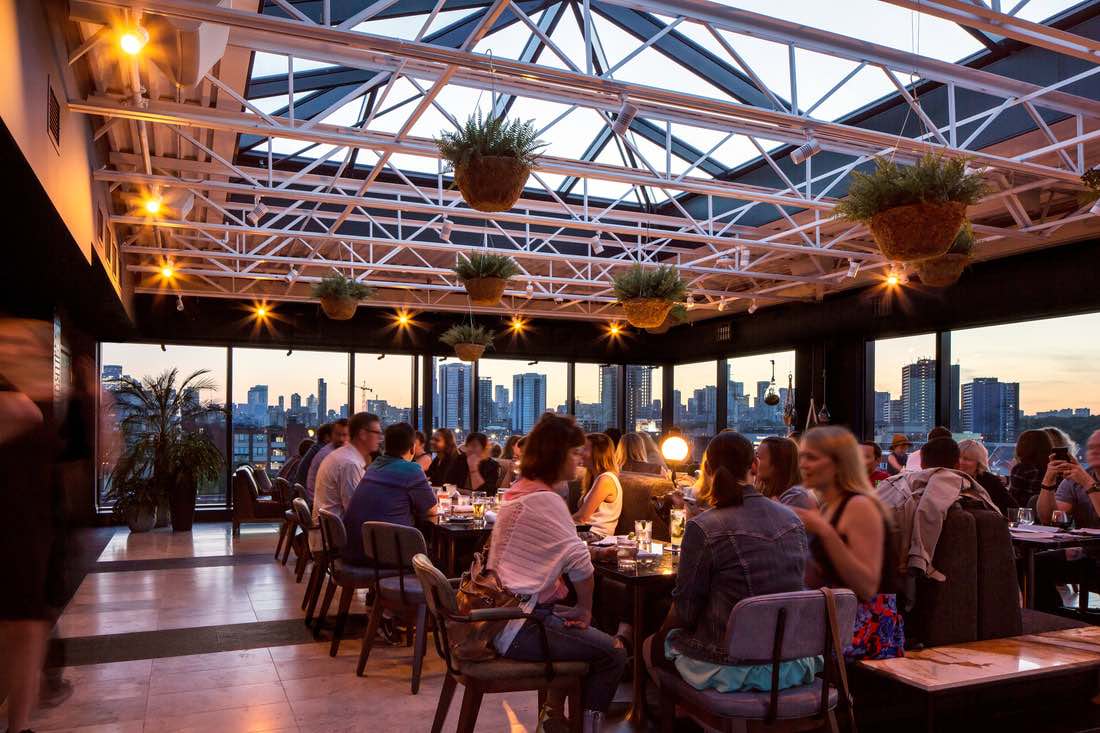 Leslieville is home to an array of trendy coffee shops, restaurants, and indie shops that have been the background to numerous film and TV productions. Famous for its foodie scene, you’ll find here some of the most Instagrammable dishes in Toronto. From fresh, local ingredients, to comfort eats, you’ll find a new favourite restaurant every weekend!

The Green Wood, known for its seasonal and sustainably-sourced dishes is a popular spot for brunch, but you can stop by for lunch or dinner any time of the week. Try their salads, sandwiches or bowls with plenty of vegetarian and vegan options.

A neighbourhood staple, Leslieville Pumps is Toronto’s only barbecue joint that’s also a gas station. This eclectic spot is a mix of gas station, general store and no-frills restaurant. Their brisket is particularly popular, the beef is smoked for 14 hours, piled onto a fresh bun and topped with crispy sweet onions, grainy mustard and house barbecue sauce.

If you’re interested in some greasy, finger-licking food, give Descendant Pizza a try. The city's first Detroit-style pizzeria serves deep-dish pizza cooked in a heavy, rectangular steel pan, with cheese right up to the edge and loaded with toppings.

If you’re looking for some entertainment to complete your night out, then you can catch a play at the Streetcar Crowsnest or head for a concert at The Opera House.

Head east for a taste of the East

If you make your way to the northeast corner of Leslieville you’ll come across brightly coloured fabrics and rich aromas. Home to North America’s largest South Asian ethnic market, Little India is a feast for the senses. Browse the shops for colourful silks to make the perfect sari or buy vibrant, beautifully adorned clothing at import clothing shops. Make sure to come hungry so you can indulge in the mix of restaurants featuring authentic food from North and South India, Pakistan, Sri Lanka, and Bangladesh.

Organic food lovers will recognize the Trader-Joe’s-style supermarket Farm Boy. With only two locations in Toronto, Leslievillians are lucky to make it their go-to for weekly shopping. You can find a wide variety of organic and local produce as well as quality meats, sustainable seafood and small-batch artisanal cheese. Their ample selection of chef-quality, wholesome ready-to-eat meals can be highly appealing to those looking for a dinner shortcut.

For those who prefer smaller shops, Raise the Root on Queen Street East is a one-stop-shop for organic seasonal produce, grocery staples, and unique foods made by local artisans. Just down the street you’ll find Rowe Farms, a small shop popular for its wide selection of quality meats, raised ethically and without the use of antibiotics or growth-promoting hormones.

Rounding up the grocery store offering, you can also find a Loblaws, Food Basics, and FreshCo.

A home for families

Even though Leslieville is mainly home to young singles and couples, it can also make a great home for families. With plenty of playgrounds around, two elementary schools with a score of 8 out of 10 and a secondary school with a score of 7.7 out of 10, your new home could be here.

Do you own a home in Leslieville? We have 4 families (all pre-approved for mortgages) that are actively looking to purchase a house in this area before Christmas. Give us a call if you're thinking of selling! ??416-804-5555